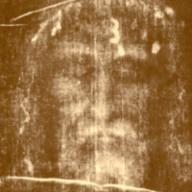 The Holy Shroud of Turin

The Shroud of Turin or Turin Shroud (Italian: Sindone di Torino) is a length of linen cloth bearing the image of a man who appears to have suffered physical trauma in a manner consistent with crucifixion. There is no consensus yet on exactly how the image was created, and it is believed by some to b